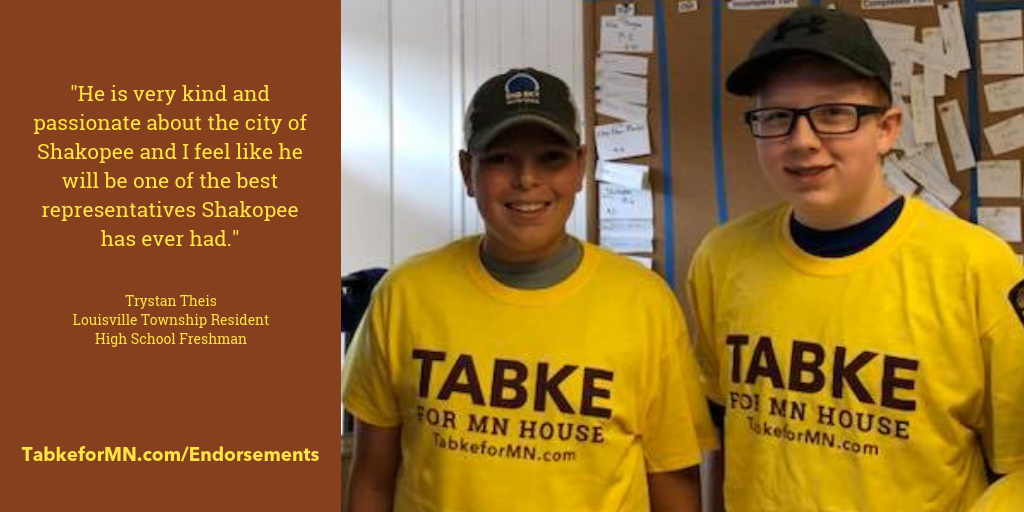 I am a freshman at Shakopee High School, and I have lived in Shakopee my whole life. I am fascinated with politics and consider myself a moderate Republican. But, because of the current political landscape and my past history with Brad, I am supporting him.

I first met Brad when he was running for mayor in 2012. He was door knocking in my old neighborhood. To be honest, all I remember is that he gave me a sticker, I was 9.

Two years later, he was seeking re-election. I remembered the time when he gave me that sticker. So, I read up about him. I found out my cousin knew Brad, and I really wanted to meet him. We had lunch at Panera and talked a lot about issues that I had written down on index cards. I was in fourth grade. After that, I supported Brad even more. I went out to canvass for him because I felt he was an amazing person and Shakopee deserved to have him as mayor.

Now he is running for the state legislator House 55A seat. Brad is the best candidate for the job. He is very kind and passionate about the city of Shakopee and I feel like he will be one of the best representatives Shakopee has ever had. I hope he gets your vote and represents us in St. Paul.
Donate $10 today to fund our Facebook Ads