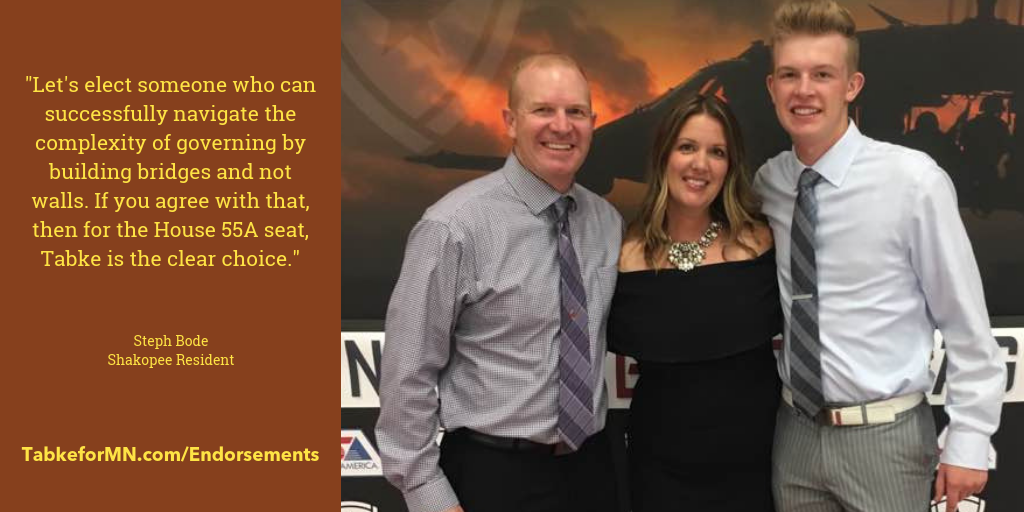 Even though I can remember when in less contentious times political differences of opinion didn’t create such divisiveness, but with the last several election cycles we have had to implement a new rule in our house: no talking politics with family or friends.

Up until the primary, my husband and I were even battling about whose sign was in the yard for the 55A race! I agreed on the Loonan sign for the primary, because of the two Republicans running he was the one I would have supported. In compromise, we agreed to forgo signs for the general election if it was a Loonan/Tabke race. With Loonan’s defeat, we are finally a house united around at least one race!

I don’t think we are alone. Sick of ultimatums, ready for the work to get done, and embracing a message of civility like I do, even my most conservative Republican family and friends are supporting Brad Tabke for the House 55A seat.

While Brad’s opposition is running on a campaign of extremes, the old “divide and conquer” that has so many of us weary of politics, Brad is seeking conversation about what can unite us. He’s reaching deep to understand what our community wants from their state representative, and he’s willing to find work to find compromise.

Brad reminds me a lot of Sen. Amy Klobuchar, a moderate, “reach across the aisle, believe in the power of Minnesota Nice” U.S. senator who embodies the temperament that many of us desire in our elected officials, in spite of our positions on the issues.

Just like in life, and our sign situation, compromising is often necessary. Tabke’s opponent routinely says he wants to go to St. Paul and be the anti-establishment.

Grandstanding, Mortensen says he wants to crush the swamp, to change course. This, from Mortensen’s webpage, is all the evidence I need to know that my support of Brad Tabke is well placed: “I’ve already been told that I’ll need to toe the line but that’s of no interest… My first, last and only concern is stripping power from government and restoring it to where it constitutionally belongs – with the individual.”

That type of grandstanding is a false promise, and I have no interest in a representative who wants to go to St. Paul to huff and puff and blow the house down. It leads me to believe that Mortensen won’t be willing to sit down, listen, build consensus and find compromise.

In speaking to my neighbors, friends and family, I know I’m not the only one who wants to see the divisive rhetoric in politics dialed back at all levels of the government.

A return to reason, respect and responsibility to the voters, not special interests is what guides my choices this election season. Let’s elect someone who can successfully navigate the complexity of governing by building bridges and not walls. If you agree with that, then for the House 55A seat, Tabke is the clear choice.