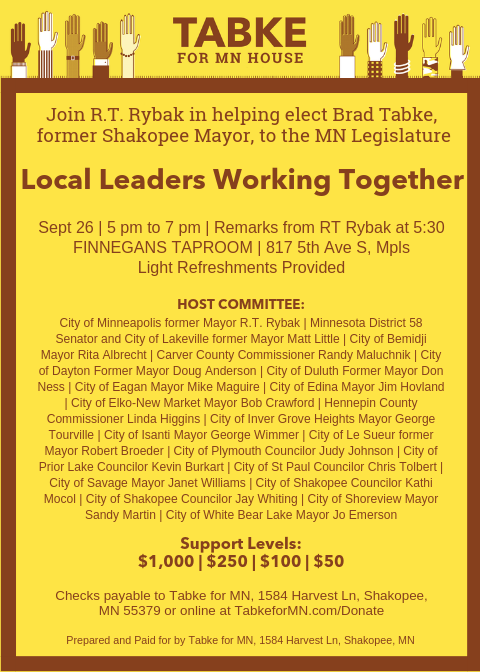 Elected city leaders, including mayors, commissioners, and city councilors across Minnesota have joined together to support Brad Tabke’s campaign for State Representative in District 55A. The host committee is inviting the public to join them Wednesday, Sept. 26 at Finnegans Taproom in downtown Minneapolis to show support for the former Shakopee mayor. Tabke’s campaign is centered on strengthening the voice of local government at the state level by working collaboratively.

“At the Legislature, I want to help focus our state government on the future for all of us and our next generations,” Tabke said. “To accomplish this, our State government must give power back to local governments. This is where the best decisions can be made— closest to the people. Local entities must have a voice on policy and how to best spend our hard-earned dollars.”

“During my time as mayor I was open to connecting with anyone who was willing to work hard to find solutions that were a win for them and a win for Shakopee. It never mattered where they were from, what they wanted to accomplish, or what party they represented. We worked together for the betterment of our community.

This skill of collaborative governing is one of the most important things I want to bring to the Minnesota House,” Tabke said.

With Tabke as mayor, working with citizens, businesses, and elected officials, Shakopee experienced economic growth and attracted thousands of new jobs at prominent corporations including Amazon, Emerson, Bayer, and Shutterfly.

The host committee, which continues to grow, includes:

Finnegans Taproom is located at 817 5th Ave S. Minneapolis, Minn. 55404. The event runs from 5 to 7 P.M. with opening remarks from Rybak beginning at 5:30. More information can be found at www.TabkeForMN.com/Events.